Pawning an exotic car is not the kind of transaction you should carry out at a local pawn shop. An exotic car pawn is a high-end specialty transaction that requires a reputable asset lender with experience appraising and storing exotic vehicles. Chapes-JPL is the nation’s premier asset lender. It’s one of the few brokers that offers free car storage with any loan on a classic or exotic car.

Why pawn an exotic car?

Chances are if you own an super car, you didn’t get it by toiling away as a low-level employee. An overwhelming portion of exotic vehicle owners are entrepreneurs with years of experience running successful enterprises. However, entrepreneurs sometimes have irregular cash flows and may need a loan for business opportunities or financial difficulties. Unfortunately, traditional banking establishments are not big fans of irregular cash flows when it comes to making loans.

So, what if you just happen to own an absolutely gorgeous, luxury car that is worth a lot of cash? Why sell it? It may be more beneficial to pawn it rather than sell it. Owners may lose as much as 30 percent of an asset’s value if it is sold. Jeff Zager, CEO of Chapes-JPL, lists three reasons for pawning a valuable asset, such as a luxury car, rather than going through the standard bank loan process in which any collateral remains in the owner’s possession while the loan is active.

Chapes-JPL interest rates are generally from 3 to 4 percent per month for an exotic pawn loan. Then if your business opportunity pans out and you make some great money, you can pay back your pawn loan with interest and get your car back.

What qualifies as an exotic car?

As you consider pawning your super car, it is useful to be sure that it qualifies in that category. Otherwise, you may find that your car is not as valuable as you thought. According to exotic-cars.com, there are seven criteria that qualifies a vehicle as an exotic car:

Limited Edition – This means your precious car is out of the ordinary, and there are a very few cars around like it.

Expensive – Once again, it is no common vehicle. The rule of thumb appears to be that any car that is priced at more than $200,000 can be considered exotic. Examples include Ferraris, Lamborghinis, Porsches and etc.

High-end Electronics – This feature appears a little “iffy” in terms of considering a car exotic. Technological advancement and lower costs for electronic systems in the current market may result in no difference between electronics in exotic cars compared to average ones.

Stunning Design – Exotic cars have a very unique look that is “out of this world,” or “much sleeker and sophisticated if you compare them with normal cars,” according to Exotic-Cars.

Plush Leather Upholstery – An exotic car usually has “state-of-the-art” and stylish interiors that dwarf those of standard cars.

Robust Powertrain – One important differentiating feature of an exotic car in comparison to a normal car is that the manufacturer has placed more emphasis in an exotic car to power and performance than to mileage or economy.

Personalized – Exotic cars are not assembly-line creations; Buyers customize and build them according to their needs and desires.

Lamborghinis are perhaps one of the most instantly recognizable super cars in the U.S. It’s one of those cars that do a great job representing your success, determination, and hard work. Most Lamborghini owners didn’t achieve the feat of owning one by luck. If life has dealt you a favorable hand, you might be lucky and stumble into a Mercedes-Benz but never a Lamborghini. They’re for the planners, thinkers, and risk-takers. However, drawing a losing hand is sometimes inevitable and for those moments, Chapes-JPL is a straight flush on the flop.

Ferrari is one of the most recognizeable brands in the world. That’s quite a feat seeing that Ferrari only produces about 7,000 vehicles a year. Compare that to other mega brands like Coca-Cola that produces more than 1.9 billion drinks a year. That rarity contributes to the desirability of Ferraris. The opportunity to drive one is no common event, and owning such a Ferrari is well out-of-reach for the average person. The starting sale price for the most recent model, the 488 Spider, begins at $275,000.

Most people have heard the name Ferrari in their lifetime and immediately associate it with wealth and success. Jason H. Harper, a reviewer for The Verge, described Ferraris as fast and sexy. “There is no doubt they are playthings and owners show them off,” Harper remarked. He described his first experience at the wheel of a Modena 360 model more than 15 years ago this way: “Guumhhh, my body stuffed into the seat, my bone marrow cooked, and soft viscera melted into jelly.”

The Koenigsegg website touts its creation as the “fastest car in the world,” which is a very bold claim. How does this Swedish-made car come by such a claim to fame? A blog post in the company’s website describes a road test of a Koenigsegg Agera RS. It was performed in Pahrump, Nevada by factory driver Niklas Lilja November 4, 2017. This model achieved the following world records:

The German car brand Porsche is known for its durability, and is one tough little car. While Porsche has the sleek beauty of a sports car, its strengths go beyond looks. Williams Crawford, a dealership that sells and services Porsches in the United Kingdom, extracted a few key points from a video made by the Porsche company about their wonder sports car. Here are a few observations about the value of a Porsche:

According to an article in Forbes, the motivation for purchasing a Porsche 911 is rewarding oneself. The Forbes article reports that 87 percent of those purchasing this vehicle are male with a median annual income of $390,000. They “know what they want, work hard to get it and enjoy rewarding themselves when they reach a milestone.” In other words, Porsches are status symbols for successful entrepreneurs and professionals. And now that the company boasts more than 20 models, success has never been so flavorful.

The Pagani website touts its very exotic Zonda R model as not just “a supercar,” but “the supercar.” The Pagani line of cars is the creation of Argentinian-born Horacio Pagani. Most of his youth was spent shaping balsa wood into carved models of what would later be considered as “the most beautiful cars in the world.”

Although Pagani was born in Argentina, Pagani manufactures their “supercars” in Italy. They are truly rare and precious cars. Beauty is not the Pagani’s only virtue, however, but speed, power, and aerodynamics as well. The company’s website describes the Zonda R model as being a super car for the racetrack and from the racetrack.

The PFAFF auto club blog describes the Pagani Huayra as being “a mobile treasure-trove of steampunk supercar details.” Manufacturing of the Huayra model ended with a run of only 100 cars. Here are just a few amazing attributes of the newest model – the Huayra BC – a run of only 20 cars that were already spoken for before they were made: 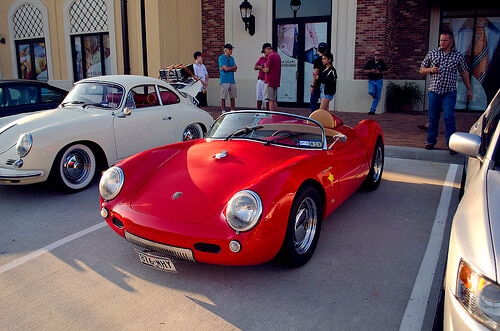 Appraisal – If you are pawning a modern super car, Chapes-JPL estimates its value by considering the year, make, model, and overall condition. If the car is a classic model, however, Chapes-JPL will dig deep into specialist car auctions like Bonhams. Chapes-JPL also talks to people with their finger on the pulse and steering wheel of the market. You will receive a final loan offer after the physical inspection.

Vehicle Storage – Chapes-JPL considers its customers’ desire for discretion. When it comes time to take possession of the vehicle, the company will either send an unmarked transport to pick up the car at a location of the customer’s choice or the customer can drive it to the storage location in Atlanta. The safety of these assets are Chapes-JPL’s priority. Although most luxury pawn shops charge a fee for oversize items, Chapes-JPL stores exotic and classic vehicles free of charge.

Payment – Generally, pawn loans are very short-term transactions, anywhere from one to four months. However, Chapes-JPL does offer loan terms with the option of paying off just the interest that accrues every month. If no payment has been made by the client at the end of the loan term, the borrower is no longer considered the legal owner of the car. After that time, Chapes-JPL will attempt to sell it.

Get A Free Appraisal